Without CCW insurance I hope you have an extra $50k-$2 million?

So you decided to get your Michigan CPL and start carrying a weapon because, it makes you and your family safer, right?…Wrong!  Without CCW insurance, you may be putting yourself in greater danger than the gunfight itself!

Should you ever find yourself in the middle of a defensive encounter, winning the fight is only part of the equation.  There may be very real consequences to winning, some that may be as life destroying as losing the gun fight!  You will most likely face psychological and financial consequences as well.

The video below is an example of how fast things can happen, how they can go wrong, and how your decisions can cause great damage to many lives, including yours.  Be warned!!!! While the video is not graphic(bloody), it is very disturbing and extremely sad.

A woman and with her young daughter are at a store purchasing ice cream, when an armed robber enters the store.  There’s an off-duty policeman just off camera on the right side of the screen. He witnesses the robbery, draws his gun and starts firing on the bad guy.  Who, promptly runs from the store.  Unfortunately for the woman and her daughter, the woman gets caught in the cross-fire and is shot and killed in front of her daughter by the off-duty cop. That is the narrative of the video. (Continued below video)

What do we take away from this tragedy?

As a self defender you would be well within the law, in the State of Michigan, to open fire on this guy.  He was brandishing a weapon and was a threat to all inside.  Now, in Michigan, under the law, that poor lady’s death would not be put on you.  The robber would be charged with murder BUT…You would not only have to live everyday of your life knowing you took that little girl’s mom from her but the family could sue you for damages.  And that is where things go from can’t get any worse, to they did! 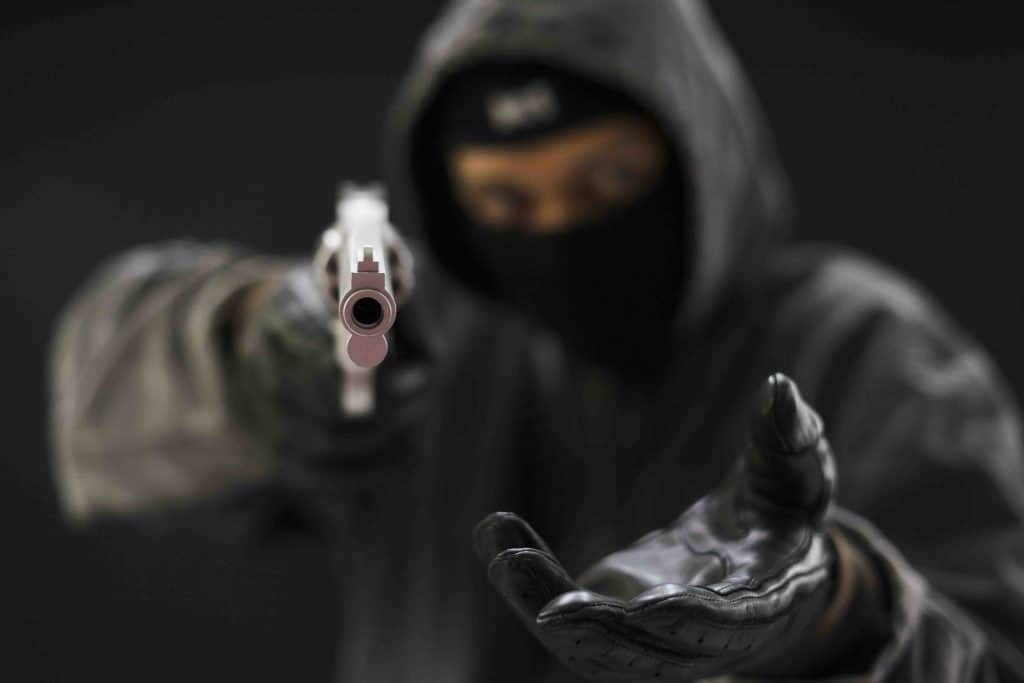 The Aftermath! Or the System Stick-up!

This is one of many ways you can find yourself in financial peril!  In most defensive shootings you will find that the police and prosecutor (especially a gun hater) will not be your friend. You will most likely be handcuffed, questioned, thrown in jail and if they feel you had broken the law, prosecuted.

You will first have to post bail, $5k to $50k, than find a good lawyer and put him/her on retainer, which for a shooting crime, will start at $30k-50k and that will most likely just cover expenses up to the preliminary hearing.  If you go to trial expect an additional $100k-$200k.  Or you can put your life in the hands of an overworked, underpaid, inattentive public defender, almost assuring a lengthy prison sentence.

Now, let’s say you beat the case and win. You most likely will be sued by the family of the woman looking for support and compensation for the loss of the young mother.  Just because you were found “Not Guilty” in a criminal matter, does not protect you from a civil suit! (Remember O.J. Simpson?) If you lose your civil case which could cost as much as your criminal case in attorney’s fees, you will most likely be on the hook for anywhere from $500k-$2 million.

And unlike most other debt, bankruptcy will not wipe that debt away! You WILL be on the hook for that for the rest of your life and at times will have wished you’d just observed and been a good witness, or died in the gun battle.

How to protect yourself?

There are other insurance providers but these are the two i’m familiar with and use.  If you had to choose just one, I would go with USCCA CCW insurance, only because of the liability coverage. I don’t mind getting a lesser attorney, losing my civil case or pleading, and giving away their money.  The cost of the attorney will be far less than the cost of the suit, should I lose.  Whereas, if you go with Firearms Legal Protection, you may be able to afford the best attorney but that doesn’t guarantee victory and you will be on the hook for every penny, should you lose.

When you consider the cost of the whole thing, you could be looking at expenses totalling $500k up to $3 million.  My advice, buy both! You pay $300+ a month to insure a $30k automobile. You can purchase the best plans from both giving you unlimited legal coverage and $2 million civil protection, not to mention a whole slew of other benefits for…Under $100 a month.

You carry to protect your life, isn’t protecting our way of life worth a few dollars a month for CCW Insurance?